The aim of this project is to implement an end-to-end pipeline to swap faces in a video just like Snapchat’s face swap filter or this face swap website. It’s a fairly complicated procedure and variants of the approach you’ll implement have been used in many movies.

One of the most popular example of using such a method is replacing Paul Walker’s brother’s face by Paul Walker’s face in the Fast and Furious 7 movie after his sudden death in a car crash during shooting. Now that I have conviced you that this is not just for fun but is useful too. In the next few sections, let us see how this can be done.

Note that, you’ll need to be aware of ethical issues while replacing faces. Similar methods are used by people for the creation of fake videos of celibrities called Deep Fakes.

Record two videos. One of yourself with just your face and the other with your face and your friend’s face in all the frames. Convert them to .avi or .mp4 format. Save them to the Data folder. Feel free to play around with more videos. In the first video, we’ll replace your face with some celebrity’s face or your favorite relative’s face. In the second video we’ll swap the two faces. If there are more than two faces in the video, swap the two largest faces.

The overview of the system for face replacement is shown below. 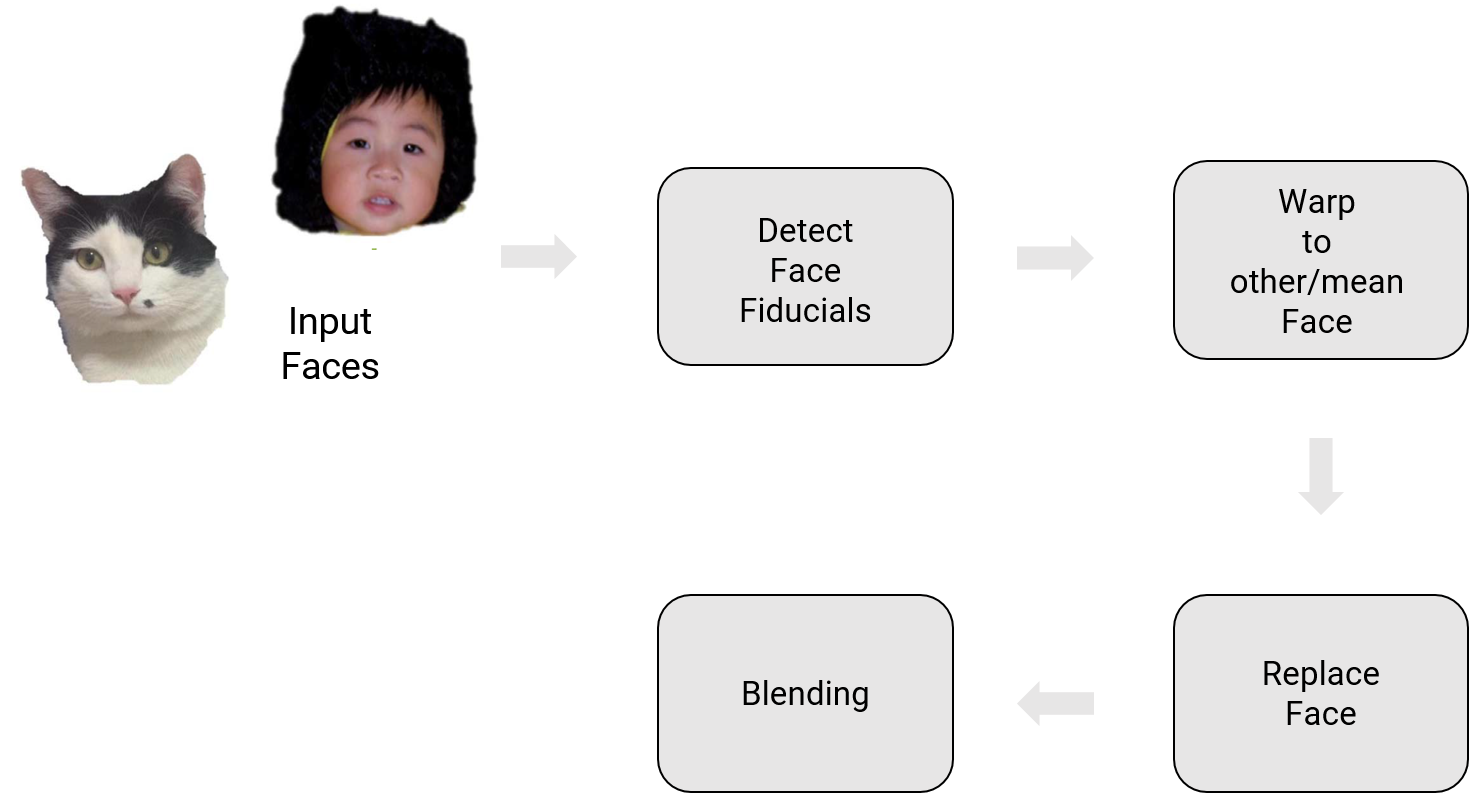 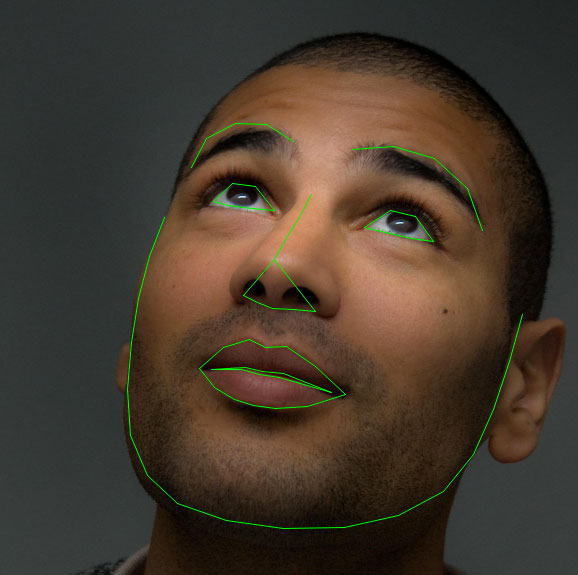 Fig 2: Output of dlib for facial landmarks detection. Green landmarks are overlayed on the input image.

Like we discussed before, we have now obtained facial landmarks, but what do we do with them? We need to ideally warp the faces in 3D, however we don’t have 3D information. Hence can we make some assumption about the 2D image to approximate 3D information of the face. One simple way is to triangulate using the facial landmarks as corners and then make the assumption that in each triangle the content is planar (forms a plane in 3D) and hence the warping between the the triangles in two images is affine. Triangulating or forming a triangular mesh over the 2D image is simple but we want to trinagulate such that it’s fast and has an “efficient” triangulation. One such method is obtained by drawing the dual of the Voronoi diagram, i.e., connecting each two neighboring sites in the Voronoi diagram. This is called the Delaunay Triangulation and can be constructed in \(\mathcal{O}(n\log{}n)\) time. We want the triangulation to be consistent with the image boundary such that texture regions won’t fade into the background while warping. Delaunay Triangulation tries the maximize the smallest angle in each triangle.

Fig 3: Triangulation on two faces we want to swap (a cat and a baby). 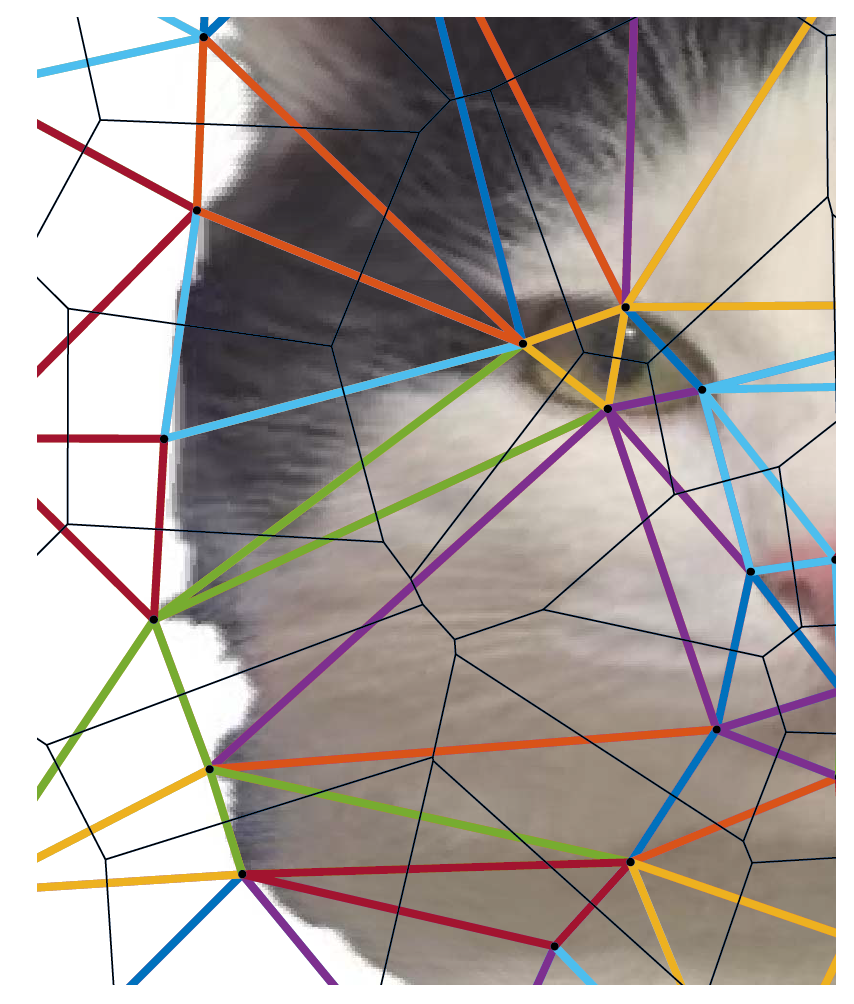 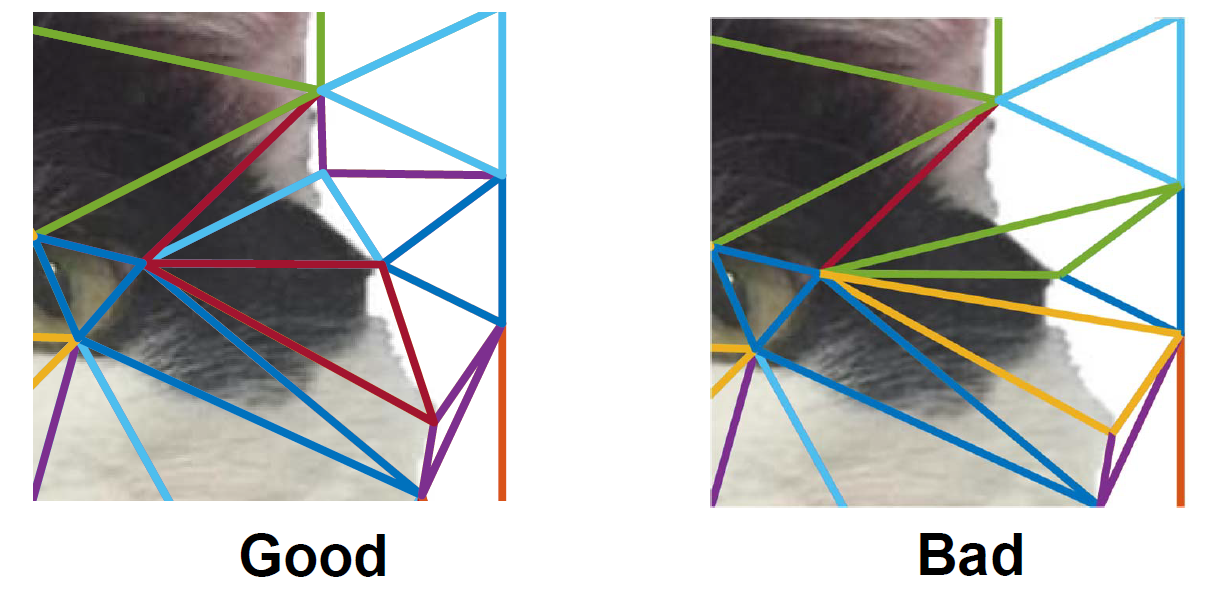 Fig 5: Comparison of good and bad triangulation depending on choice of landmarks.

Since, Delaunay Triangulation tries the maximize the smallest angle in each triangle, we will obtain the same triangulation in both the images, i.e., cat and baby’s face. Hence, if we have correspondences between the facial landmarks we also have correspondences between the triangles (this is awesome! and makes life simple). Because we are using dlib to obtain the facial landmarks (or click points manually if you want to warp a cat to a kid), we have correspondences between facial landmarks and hence correspondences between the triangles, i.e., we have the same mesh in both images. Use the getTriangleList() function in cv2.Subdiv2D class of OpenCV to implement Delaunay Triangulation. Refer to this tutorial for an easy start. Now, we need to warp the destination face to the source face (we are using inverse warping so that we don’t have any holes in the image, read up why inverse warping is better than forward warping) or to a mean face (obtained by averaging the triangulations (corners of triangles) of two faces). Implement the following steps to warp one face ( or source) to another ( or destination).

Here, the Barycentric coordinate is given by . Note that, the matrix on the left hand size and it’s inverse need to be computed only once per triangle. In this matrix, represent the corners of the triangle and represent the and coordinates of the particular triangle corner respectively.

Now, given the values of the matrix on the left hand size we will call and the value of we can compute the value of as follows:

Here, is given as follows:

Note that, after we obtain , we need to convert the values to homogeneous coordinates as follows:

The warped images are shown below. 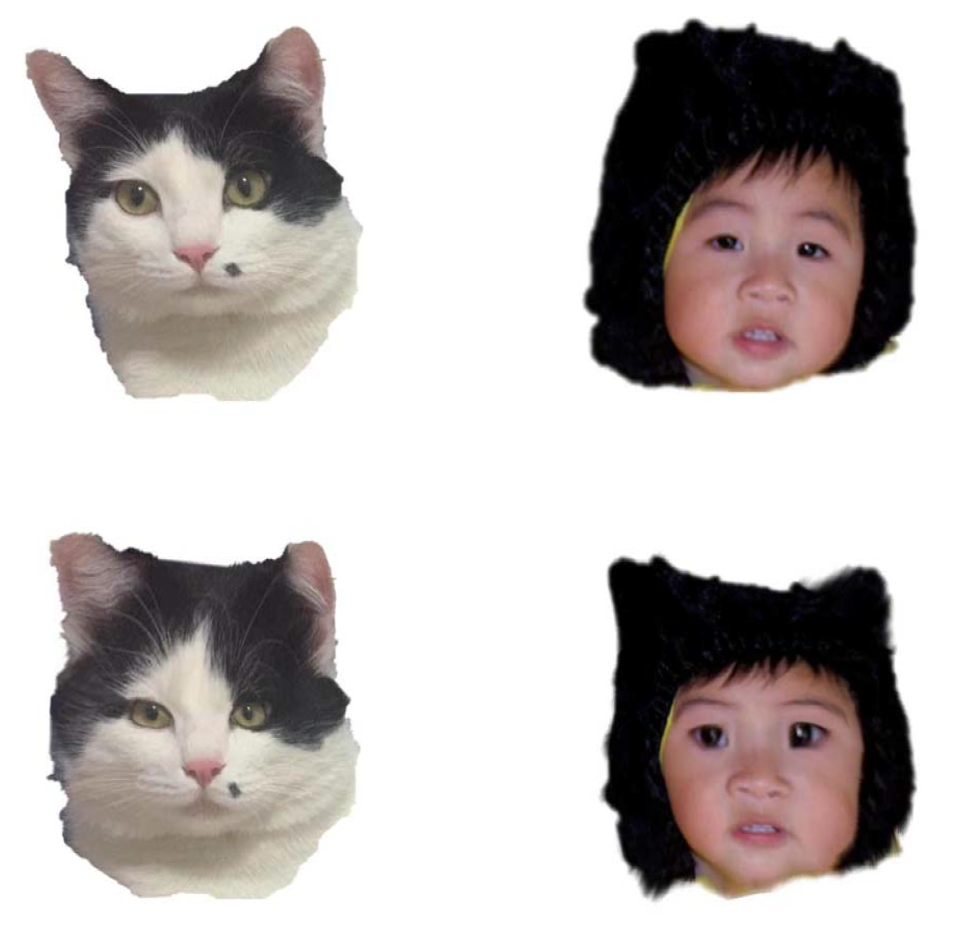 As we discussed before, triangulation assumes that we are doing affine transformation on each triangle. This might not be the best way to do warping since the human face has a very complex and smooth shape. A better way to do the transformation is by using Thin Plate Splines (TPS) which can model arbitrarily complex shapes. Now, we want to compute a TPS that maps from the feature points in to the corresponding feature points in . Note that we need two splines, one for the coordinate and one for the . Imagine a TPS to mathematically model beating a metal plate with a hammer. A thin plate spline has the following form:

Note that, again in this case we are performing inverse warping, i.e., finding parameters of a Thin Plate Spline which will map from to . Warping using a TPS is performed in two steps. Let’s look at the steps below.

Note that, both warping methods solve the same problem but with different formulations, you are required to implement both and compare the results.

This part is very simple, you have to take all the pixels from face , warp them to fit face and replace the pixels. Note that simply replacing pixels will not look natural as the lighing and edges look different. A sample output of face replacement is shown below. 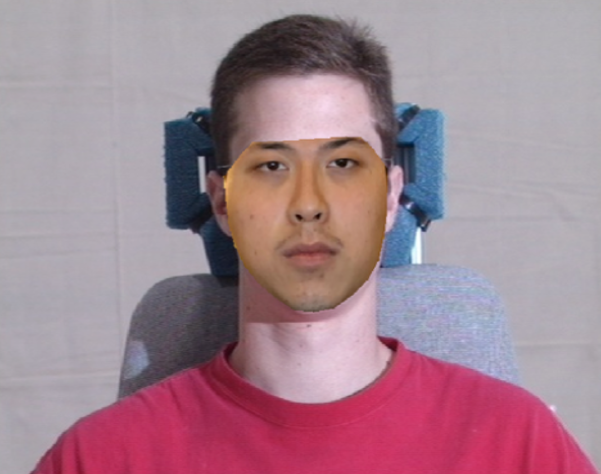 Fig 7: Output of sample face replacement. Notice the difference in color and edges. The output is not a seamless blend.

We will follow a method called Poisson Blending to blend the warped face onto the target face. More details about this method can be found in this paper. Note that, you DO NOT have to implement this part from scratch, feel free to use any open-source implementation and cite your source in your report and your code. Your task in this part is to blend the face as seamlessly as possible. Feel free to reuse concepts you learnt from panorama stitching project’s last part here. A good blending output is shown below. 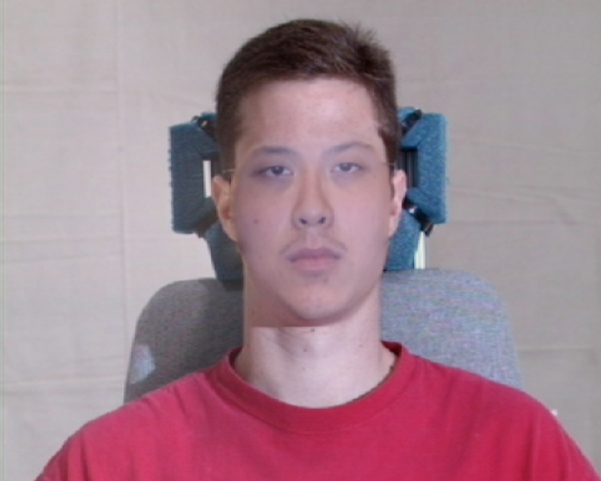 After you have detected, warped and blended the face your algorithm works really well for individual frames. But when you want to do this for a video, you’ll see flickering. Come up with your own solution to reduce the amount of flickering. You can use a low-pass filter or a fancy Kalman Filter to do this. Feel free to use any third party or built-in code to do this. If you use third party code, please do not forget to cite them. Look at this holy grail video of face replacement where Jimmy Fallon interviews his cousin.

Jimmy Fallon interview his twin! from ZeroCool22 on Vimeo.

For this phase, we’ll run an off-the-shelf model to obtain face fiducials using deep learning. We think that implementing this part is fairly trivial and is left as a fun exercise if you want some programming practice (you are not graded for the implementation of the network). We’ll use the code from this paper, which implements a supervised encoder-decoder model to obtain the full 3D mesh of the face. We recommend you to read the paper for more details. The code from the paper can be found here. Your task is to setup the code and run to obtain face fiducials/full 3D mesh. Use this output to perform face replacement as before. Feel free to use as much code as you want from last part/phase. Present a detailed comparison of both the traditional methods (triangulation and TPS) along with the deep learning method.

One day (24 hours) before the deadline, a test set will be released with details of what faces to replace. We’ll grade on the completion of the project and visually appealing results.

If your submission does not comply with the following guidelines, you’ll be given ZERO credit

Your submission on ELMS/Canvas must be a zip file, following the naming convention YourDirectoryID_p2.zip. If you email ID is abc@umd.edu or abc@terpmail.umd.edu, then your DirectoryID is abc. For our example, the submission file should be named abc_p1.zip. The file must have the following directory structure because we’ll be autograding assignments. The file to run for your project should be called Wrapper.py. You can have any helper functions in sub-folders as you wish, be sure to index them using relative paths and if you have command line arguments for your Wrapper codes, make sure to have default values too. Please provide detailed instructions on how to run your code in README.md file. Please DO NOT include data in your submission.

For each section of the project, explain briefly what you did, and describe any interesting problems you encountered and/or solutions you implemented. You MUST include the following details in your writeup:

Any functions regarding reading, writing and displaying/plotting images in cv2, matplotlib

You are encouraged to discuss the ideas with your peers. However, the code should be your own, and should be the result of you exercising your own understanding of it. If you reference anyone else’s code in writing your project, you must properly cite it in your code (in comments) and your writeup. For the full honor code refer to the CMSC733 Spring 2019 website.

This fun project was inspired by a similar project in UPenn’s CIS581 (Computer Vision & Computational Photography).